These algorithms use graph theory to calculate the importance of any given node in a network. They cut through noisy data, revealing parts of the network that need attention – but they all work differently. Each measure has its own definition of ‘importance’, so you need to understand how they work to find the best one for your graph visualization applications.

Let’s look at some social network analysis measures, how they work, and when to use them.

Definition: Degree centrality assigns an importance score based simply on the number of links held by each node.

What it tells us: How many direct, ‘one hop’ connections each node has to other nodes in the network.

Definition: Betweenness centrality measures the number of times a node lies on the shortest path between other nodes.

What it tells us: This measure shows which nodes are ‘bridges’ between nodes in a network. It does this by identifying all the shortest paths and then counting how many times each node falls on one.

When to use it: For finding the individuals who influence the flow around a system.

A bit more detail: Betweenness is useful for analyzing communication dynamics, but should be used with care. A high betweenness count could indicate someone holds authority over disparate clusters in a network, or just that they are on the periphery of both clusters.

Definition: Closeness centrality scores each node based on their ‘closeness’ to all other nodes in the network.

What it tells us: This measure calculates the shortest paths between all nodes, then assigns each node a score based on its sum of shortest paths.

When to use it: For finding the individuals who are best placed to influence the entire network most quickly.

A bit more detail: Closeness centrality can help find good ‘broadcasters’, but in a highly-connected network, you will often find all nodes have a similar score. What may be more useful is using Closeness to find influencers in a single cluster.

Definition: Like degree centrality, EigenCentrality measures a node’s influence based on the number of links it has to other nodes in the network. EigenCentrality then goes a step further by also taking into account how well connected a node is, and how many links their connections have, and so on through the network.

What it tells us: By calculating the extended connections of a node, EigenCentrality can identify nodes with influence over the whole network, not just those directly connected to it.

A bit more detail: Our tools calculate each node’s EigenCentrality by converging on an eigenvector using the power iteration method. Learn more about EigenCentrality

Definition: PageRank is a variant of EigenCentrality, also assigning nodes a score based on their connections, and their connections’ connections. The difference is that PageRank also takes link direction and weight into account – so links can only pass influence in one direction, and pass different amounts of influence.

What it tells us: This measure uncovers nodes whose influence extends beyond their direct connections into the wider network.

When to use it: Because it takes into account direction and connection weight, PageRank can be helpful for understanding citations and authority.

A bit more detail: PageRank is famously one of the ranking algorithms behind the original Google search engine (the ‘Page’ part of its name comes from creator and Google founder, Larry Page).

To truly understand a social network, you need to visualize it. Our toolkits – which incorporate all the social network analysis measures described here – make it fast and easy to build powerful social network visualization tools that reveal insight in your complex connected data.

Want to visualize your networks? To try our products, request a trial to get started. 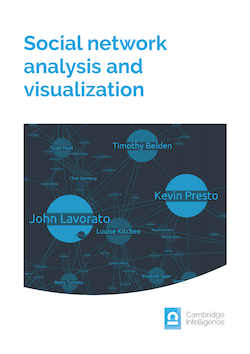